Our new console for the church arrived a couple of days back. The board is a 32-channel Soundcraft GB-4. I have been doing a system test to ensure that everything on the board is working fine. So far, so good. I hope to put the board in service next week.

I was also checking out where some of the megachurches have been going with their console decisions. I took a look at Lakewood Church in Houston. They installed three Euphonix System 5 Consoles in the fall of 2004: a 40 fader System 5 for FOH; a 32 fader System 5 for Monitors, and a 40 fader System 5-B for broadcast & post. The three systems will share 104 mic preamps and over 300 AES & analog I/O via fiber optics. 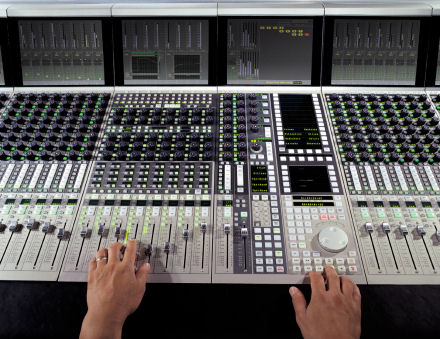 I also found an interesting article on the growth of such Megachurches in the United States. I doubt that similar patterns are evident in Canada.

Maybe churches aren’t so different from corporations. World Changers Ministries, for instance, operates a music studio, publishing house, computer graphic design suite and owns its own record label. The Potter’s House also has a record label as well as a daily talk show, a prison satellite network that broadcasts in 260 prisons and a twice-a-week Webcast. New Birth Missionary Baptist Church has a chief operating officer and a special effects 3-D Web site that offers videos-on-demand. It publishes a magazine and holds Cashflow 101 Game Nights. And Lakewood Church, which recently leased the Compaq Center, former home of the NBA’s Houston Rockets, has a four-record deal and spends $12 million annually on television airtime.

Welcome to the megabusiness of megachurches, where pastors often act as chief executives and use business tactics to grow their congregations. This entrepreneurial approach has contributed to the explosive growth of megachurches–defined as non-Catholic churches with at least 2,000 members–in the U.S. Indeed, Lakewood, New Birth, The Potter’s House and World Changers, four of the biggest, have all experienced membership gains of late. Of course, growth for them has a higher purpose: to spread their faith to as many people as they can. “In our society growth equals success,” says Scott Thumma, faculty associate at the Hartford Institute for Religion Research. “And religious growth not only equals success but also God’s blessing on the ministry.”

In 1970, there were just ten such churches, according to John Vaughn, founder of Church Growth Today, which tracks megachurches. In 1990, 250 fit that description. Today, there are 740. The most common trait that these churches share is their size; average number of worshippers is 3,646, up 4% from last year, according to Vaughn. But they also demonstrate business savvy, with many holding conferences (47%) and using radio (44%) and television (38%), according to a 1999 survey conducted by the Hartford Institute for Religion Research. The average net income of megachurches was estimated at $4.8 million by that same survey.

The technology that supports these megachurches is world class. I suspect their maintenance budget on audio/visual technology alone is greater than the total budget of my church.

You can find the full article on Megachurches here.