But I’ve lost an hour. A new book all about Daylight Savings Time has just been released. It’s called Sieze the Daylight: The Curious and Contentious Story of Daylight Saving Time by Dr. David Prerau. You can look at this site for more information about the book

A little history on Daylight Savings from the CBC:

Several areas, including parts of Europe, Canada and the U.S., followed suit during the First World War. In most cases daylight saving ended with the armistice.

During the Second World War, a different form of daylight saving was reinstated by Britain and clocks were set two hours ahead of GMT during the summer. It was known as Double Summer Time. The saving didn’t stop with the summer, as clocks were rolled back to be one hour ahead of GMT through the winter.

The Uniform Time Act, enacted by the U.S. Congress in 1966, established a system of uniform (within each time zone) Daylight Saving Time throughout most of the U.S. and its possessions, exempting only those states in which the legislatures voted to keep the entire state on standard time.

With a few exceptions, most jurisdictions in Canada and the U.S., move their clocks ahead by one hour on the first Sunday of April and move back an hour on the last Sunday of October. It’s up to each province to decide whether or not to use Daylight Saving Time, and not all do.

Daylight Saving Time is observed in most of the United States, with the exceptions of part of Arizona and part of Indiana. Much of Africa does not observe it, nor does China, Japan, the Indian subcontinent or Indonesia. Some parts of Australia have adopted Daylight Saving Time. 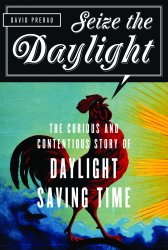 An iTune A Day
Philadelphia Freedom
Spring Cleaning
How Much Is Enough?
Chain Link
Milestones
Week in Review
Passing Away
0 replies

Slip Sliding AwayRoad To The Masters
Scroll to top