There was a piece in the National Post today on a reception, hosted by the Queen of England, for Britain’s music industry. Amongst the 500 or so celebrities were some of the greatest guitar players that I have ever known: Eric Clapton, Jeff Beck, Jimmy Page and Brian May.

Between the four of them, they have been in groups that have sold well over 300 million albums. And, they are getting older. Eric Clapton is turning 60 this year. Jeff Beck and Jimmy Page are both turning 61. And, Brian May, guitarist and founding member of Queen, is turning 58. 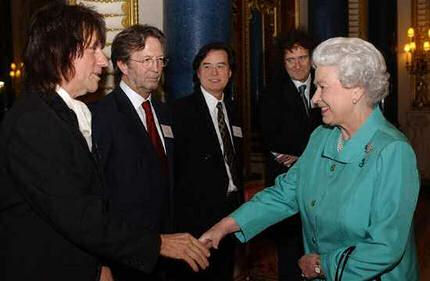 My birthday was yesterday. And, between my work in audio engineering and playing guitar, it looks as though I have at least 12 more years before I get to meet the Queen. And, by then, these great players will be in their seventies. Egads.

Sounding Board
Future Upgrades
Remember the Force, Luke!
Live Disaster
Latency and the Quest for Tone
The Space Between the Notes
Back In The Saddle
Perfect Pitch
0 replies