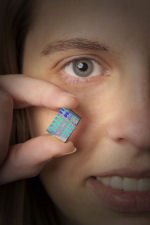 Yesterday IBM, Sony and Toshiba announced the specifics behind their efforts to create the next generation processor platform called the Cell microprocessor. The chip will offer a very high-speed clock, above 4GHz, and it will deliver upwards of ten times the performance of current generation Intel microprocessors.

The chip is intended to compete for the digital home and the first batch of these processors should show up in the new Sony Playstation 3. The prototype chip is comprised of one 64-bit PowerPC processor core and eight separate processing cores that the companies call “synergistic processing elements,” or SPEs. The cores can support multiple operating systems and programming models through the use of virtualization technologies.

This next wave of microprocessor technology will have a massive impact on rich media which bodes well for those of us working in digital audio and video. You can find IBM’s press release on the Cell chip here.

You can never have too much processing power.