The Airbus 380 is an impressive feat of aviation engineering. And the big reveal will take place today. The world’s first full-length twin-deck aircraft will be revealed at the Jean-Luc Lagardere Final Assembly Line hall at Toulouse, France. From the Airbus press release:

The 555-seat A380 passenger aircraft has a range of up to 8,000nm/15,000km, allowing it to fly non-stop between Europe and Asia, while the three-deck long-range freighter version, the A380F, will be able to carry up to 152 tonnes/ 335,000 lbs of cargo on standard pallets over distances of up to 5,600nm/10,400km. Incorporating the most advanced technologies available in this decade, it will be the most fuel efficient and environmentally friendly airliner ever built, while offering unequalled levels of passenger comfort and cargo carrying capability. First passenger operations are scheduled to begin in 2006 when the A380 is due to enter service. In addition, the first A380F, the freighter version of the aircraft, is expected to begin operations in 2008. 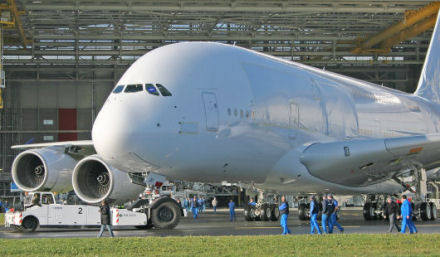