I needed to find a concert grand in a hurry to retake a piano track. The original track was fine from a performance perspective however the vocalist wanted the arrangement down a tone.

I decided to try Lydian Sound for a couple of reasons. Obviously, they had a nice Yamaha C7F II Concert Grand Piano. They have a great equipment list and competitive rates. They also had some time available when I needed it. And their studio is only about 15 minutes away from mine.

I could not arrange for the vocalist to join the tracking session and so I asked another artist that I have been working with to help me track a guide vocal for the session. He has been spending the past six months working in my studio. After the session he told me that my studio definitely has a better atmosphere. I told him that there were definitely a few pieces of gear at Lydian that I would love to have in my rack.

Although not specifically mentioned in the 10 commandments I have to believe that gear envy is a sin. I must not lust over another studio’s equipment.

I enjoyed the afternoon tracking at Lydian. The staff were friendly and professional.

It’s funny the differences that I noticed.

I keep the Pro Tools platform in my own studio very close to the Digidesign release schedule. I am currently running 6.4. However, Lydian is running 5.x. They could not read the Pro Tools session file that I brought over because of their backdated release. No real issue as we simply created a new session file and dragged over the original audio takes from my CD.

For those of you who might not be familiar with the studio jargon a punch is a way of correcting minor flaws in a performance by redoing a small part of the music. Much like using a word processor to correct a spelling mistake. You find the mistake and you type over it. In audio engineering we call that a punch. You can rest assured that I did not hit anyone during the session yesterday.

I really liked the monitor system at Lydian. They have a custom headphone monitor system for the talent. Direct control over levels by the artists and performers. Really nice system.

Here is another photo of the tracking area at Lydian. 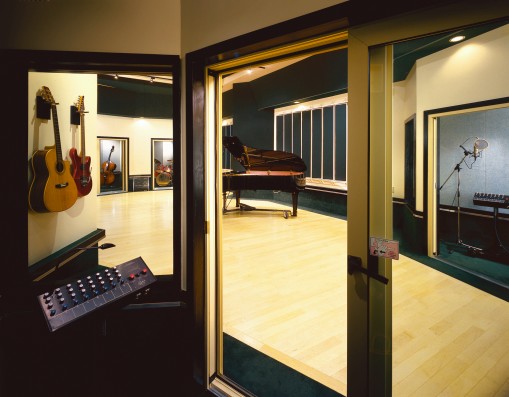 Better Late Than NeverCan You Hear Me Now?
Scroll to top